For Spring break, my mom and I went to the UK for eleven days. This is our story. Dun Dun.

The tickets were on sale. Cheap, they were. The kind of cheap that allowed me, a true cheap skate (who is not above walking the Costco samples for lunch), to buy them instantly. The only catch? The flight to London flew out of Chicago. Chicago is three hours away. Four and a half by train.

I always say that a breezy, five-hour train ride is the proper way to begin any international vacation. If you’re leaving before dawn and the train station smells like liquor and weed? Well, that’s even better.

We really did things right. 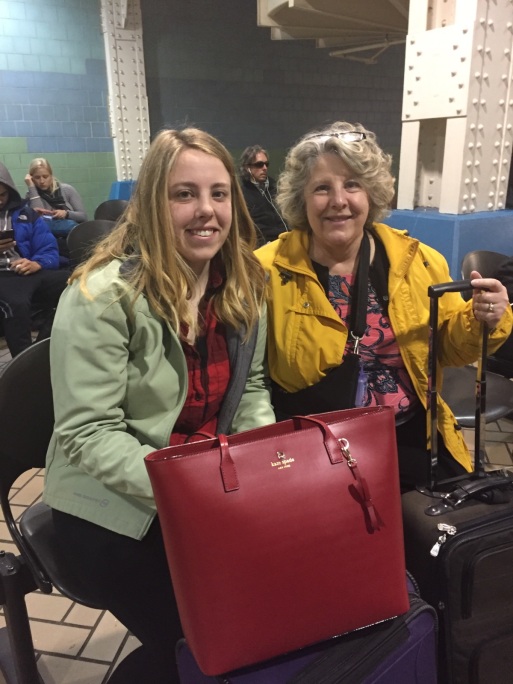 Okay, so there were other female duos out there. That’s great! Room for everybody! Oh, you’re going to London too? That’s good. Good for you. Good for us, right? You’re going to Stonehenge? Well, everyone goes to Stonehenge, right? Right? Suddenly, Mom and I realized we were like Lorelei Gilmore hiking the PCT à la Cheryl Strayed. We also realized it didn’t matter one bit.

We were so keyed up for the trip, we thought we’d go from Union Station to O’Hare via the L. Six bags + four hands + public transit = NO PROBLEM. We made it, but some of our knee skin didn’t.

Food from Indianapolis to London: two (three?) Pop-Tarts, Cliff Bar, one cheese/nut pack, Auntie Annie’s cinnamon pretzel, two airplane meals, so much coffee, another couple of Pop-Tarts in there somewhere.

In London, we arrived at this very strange hotel, the Avni Kensington, that would become our home. Not exactly a home in the sense of welcome place, but more like a home is a person—that person being the great aunt you know you’re supposed to like, but you kind of hope you never have to smell again.

We couldn’t check in since it was six in the morning, so we got ourselves on the Underground and went to Westminster bridge and walked around for a bit. It turns out, not much is open at six in the morning. We found a breakfast spot that as far as we could tell was run by exactly one person.

Purchases so far: Breakfast. Touristy London sweatshirt (because I thought it was a good idea to not wear my coat?).

Double-decker bus. Brief fight with the ticket man over printing our tickets. Mom’s phone died, and I only had the confirmation number. I was explaining this to the man, and he walked away from me. Walked away! You don’t know how almost mean we can look like we’re getting until you’re super rude to our faces, sir. It’s the kind of half-committed, near-death stare that makes people rethink their decisions, okay?

The view is gorgeous, even in a little rain.

“Is it fatigue?” you wonder. Or are you really the kind of person who gives a stink eye to the little boy hogging the computer that tells you about the buildings? What does this say about you?

Every wild trip starts out with a 6pm bedtime.

6 thoughts on “Day One in London”