Ahhhh The Princess Diaries.  Weren’t we all a little in love with Anne Hathaway and her frizzy hair in 2001?  Which reminds me, the Anne Hathaway hate bandwagon should really go away.  Of all the famous people to pick on, really?! 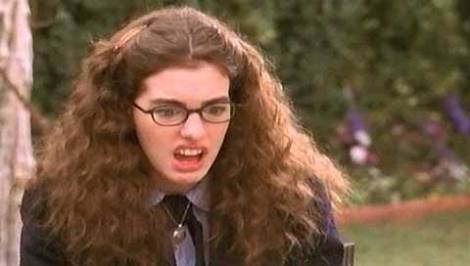 Anyway, The Princess Diaries is close to my heart for many reasons.  Let’s explore…

1. Meg Cabot.  A Hoosier and a townie!  (Please see Breaking Away for explanation.)  Doesn’t it feel good when someone who had the same childhood as you (or maybe is just from the same state and school) has success at something you want to do?  I know.  I feel the same way.  Meg Cabot = writer inspiration.  Also, her real name is “Meggin,” and that’s pretty cool.

2. Julie Andrews.  So Ms. Andrews can’t sing anymore, but you know what?  She’s still as fabulous as ever, and I would love to have a sliver of her grace.  I say “sliver” because I’ve got pie on the brain.

3. Hector Elizondo.  I feel like I’m just naming people (because I am), but Mr. Elizondo gets up on this list because I met him a couple of weeks ago!  He came into our store, and I thought, “This is it.  This is when someone finally recognizes that I am the next Julia Roberts.”  Well, it was more like him asking me if we had linen pants, me saying no, and then a little improv bit about how this company doesn’t know what kind of store they’re running. He laughed, and I thought, “He must know I’m the next Julia Roberts.  He’s just letting things simmer while I develop.  Either that, or I should grow out my hair and dye it red.”

4. “Supergirl!”  You know the song: “I’m supergirl, and I’m here to save the wor-orld. But I wanna know who is gonna save meh.”  What a delightful tune that is so catchy, I’m pretty sure I’ll be singing it in my rocking chair as I sip on my morning tea before I pop in my teeth. (I’ll be old, get it)

5.  My SISTER.   I think this might become a thing; where I relate a movie to a favorite person.  My sis, Heather (Heg, Heath, Heathwar), is an amazing, lovely, wonderful best friend for life.  I saw The Princess Diaries when I was ten (and Heg was nineteen) during the summer.  She would have been home from college, and she took me to see it at a sneak preview.  I was on top of the world that my sister, my cool, older, hip sister, would take me (four eyes) out in public to see the movie of the summer before it was officially released.  But that’s just the sort of stuff Heg has always done; she makes you feel like a million bucks.

One time (probably within a year of TPD), we visited Heggie at school for siblings weekend.  She invited her friends over to her dorm room and we watched Pocahontas Two on VHS (why do I remember this?).  Suprisingly, the sequel wasn’t holding our attention, and when I got pjs out of my bag, Heather saw an opportunity for entertainment.  She picked up a pair of Winnie The Pooh undies, and showed them to all of her friends: “aren’t these cute?”  I. was. mortified.  I ran to the bathroom and was beyond embarrassed and angry.  But Heather, realizing she embarrassed me brought me back to her room, let me pick out a pair of her undies (some with Tigger on them), and proceeded to show them to the entire group.  The group was a little confused, but I didn’t care.  I had (and still have) the best sister in the world.

It’s Heg’s birthday today, and I’m so sorry I’m missing it.  But I’m across the country, and she’s in an emergency room, saving people’s lives.  She’s an ER doctor (just so you don’t think she’s just hanging out in ER’s).  She’s an incredible mom, and I can’t thank her enough for making me an aunt to two of the best little girls.  She’s a great wife (I’m assuming. He seems happy :)).  And on top of all of her “on paper” good stuff, she’s the person I look up to.  The one who paves the way, and shows me I have nothing but good coming my way in ten years.  She loves her family, tries her best at everything she does, and she’s my best friend.  So Happy Birthday, Heg, and “you know most kids hope for a car for their sixteenth birthday, not a country!”  Nailed the callback. 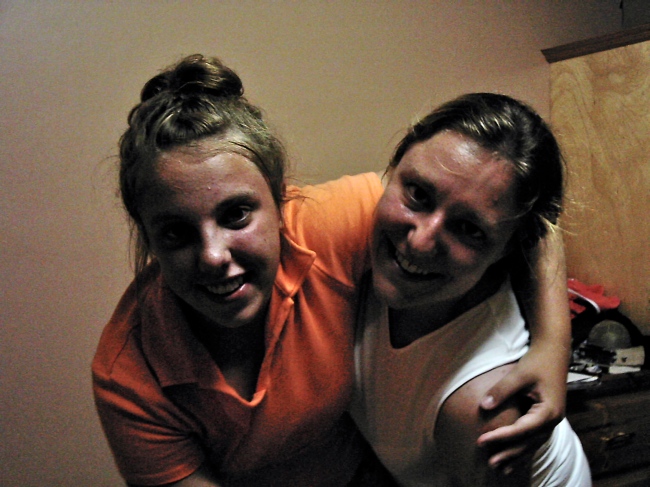