I have a question.  It’s one of those things that’s been bugging me for a long time, but I don’t bring it up often because I don’t want to seem uncool.

But I’ve had enough.

There’s something I don’t get, and I feel like I’m on the outside of a Dr. Who joke, asking, “Are you saying jiberish?”

So here it is: why mason jars?

Now, I know much like arrow tattoos and kombucha, mason jars are a part of the current rage, but I don’t really get it.  Is there something I’m missing?

Why is it better to take a to-go salad in a glass (BREAKABLE) jar?  And to then have to invest in an extra long fork to reach the goodins (aka the redeemable bits of a salad) stuck in the bottom of said jar?

Putting a cupcake in a mason jar is the surest way to turn what should be a magical cupcake eating experience into extreme frustration with icing covered fingers.   I thought mason jars were supposed to be full of weird things your mom pickled that never went away from the pantry.  Seriously, who’s idea was it to make something as enjoyable as eating a sugar-filled dessert in the most inconvenient way possible.  Is this a part of a new diet that I’m not aware of?  You’ll get so sick of the effort to eat that you’ll stop eating! 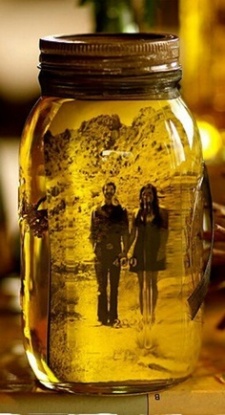 And then there’s the crafts.  These I’m not so adverse to because combining all of your leftover candles into one candle, while sure to cause a headache, does, at least, sound frugal.  But the crafts like filling a mason jar with olive oil and sticking a picture inside?  Why? Think about all of those olives Vincenzo Cortino’s dad had to squeeze for that thing (Jane Austen’s Mafia! anybody?)

I mean, is it that they last forever (until dropped)?  Do they feel old?  Like an antique that you can buy new without the weird I’ve-been-in-an-antique-store-good-luck-getting-me-to-smell-differently smell to them? Is it like the idea of putting flowers in ice cubes? It looks pretty and sophisticated until the ice cubes melt, and you attempt not to swallow wilted leaves.  Do you feel cooler drinking out of mason jars?  Okay, I will say yes to that one.

Also, I will admit that while looking at pictures of mason jar crafts, a few of them look kind of fun and cute.

But I still hold to my beginning question: what’s with the mason jar?  What am I not getting?  Why are people packing their lunches and “framing” their pictures in the least convenient way possible? What tv show do I have to watch to be in on this one? Because I am way out.

3 thoughts on “why mason jars?”