Hello! This is where I’ll be putting a collection of thoughts on rom coms: the good, the bad, and the Ephron. I don’t even know if it will make sense or if anyone will care, so it sounds like a good idea, right? Okay, then.

Debra Messing looks so good in powdered blue. (Update: There’s powdered blue in every scene. Seriously, look at her apartment.) 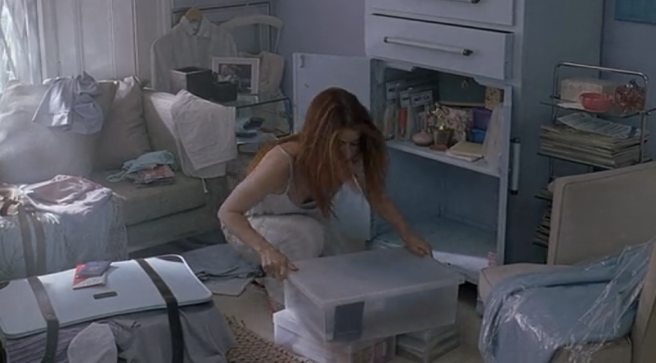 Why is Debra Messing—or the hairdresser—fighting this hair texture, huh? Free the curls!

Confession: I really wanted a matching luggage set because of this movie.

Does anyone else always associate Dermot with My Best Friend’s Wedding? Like, he is that character, which is so sad because that means things didn’t work out with Kim, and he became a prostitute instead.

Amy Adams is blonde! Amy Adams is brilliant! Honestly, she has the performance of this film. She does it broadly, but it’s all so genuine. Favorite Amy line: “Did Kat tell you she dumped you because of your funky breath?” 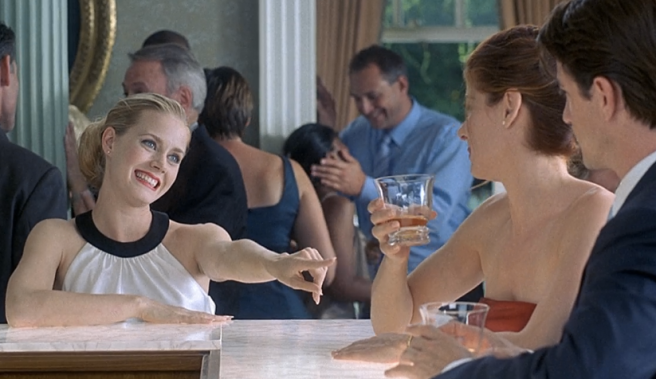 Here’s where the movie goes awry. Jeffrey? That man? That’s the one you can’t get over? They have no chemistry, and by “they” I mean Jeffrey and me.

Debra Messing is so darn funny.

It just hit me that this is the male version of Pretty Woman, but in this version the male prostitute is smooth and rich and writing being interviewed in national newspapers instead of using a safety pins to hold up his pleather boots. That’s an essay.

England has the cutest cars.

My favorite part of this movie:

It took me almost an hour to make that GIF, and it’s awful.

I’m not a prude, but Woody grosses me out. And he only has two lines. That’s acting.

I know this is like a B- rom com, but man, I do enjoy this dance scene. (Maybe because it’s our one moment of emotional development between the main characters?) 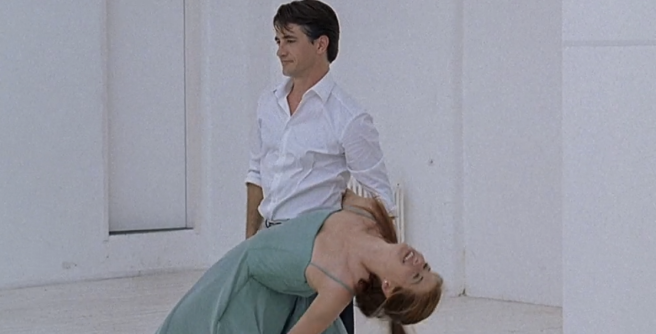 So Dermot’s character studied Comparative Literature at Brown University, and now he’s a prostitute. Is this movie a commentary on the realities of student debt and getting a job with a liberal arts degree?

Dinner party scene! Finally, we get to see the family in action. Why does this only come in once and an hour into the movie? Aside from the sister drama, we never really get to the bottom of why Kat feels so negative about her family. What’s that about? I don’t even know her parents, but who cares because it’s time for more MICHAEL BUBLÉ!

I want to live in this town.

Here’s where this movie goes awfully, awfully wrong for me. The big “get together” scene is totally blown. First of all, you have two minor characters running after each other (the sister’s fiancé and the ex-fiancé). I don’t care about them. At all. We haven’t even spent time with them! Second, Debra’s “movie dad” quotes the same article Dermot’s character quoted to her; it comes off as very coincidental. This is the one moment a rom com should earn, and this one doesn’t. Dad: “Here, let me bring up this line when mentioned before *winks to audience.” Lastly, what does Dermot say when he finally gets to his girl?

“I realized I’d rather fight with you than make love with anyone else.”

Umm what? Did you guys even fight? If we rewind the tape I think we’ll see that about two lines were exchanged and then they separated. Also, he’s a prostitute, right? Basically he said, “I’d rather you yell at me for two minutes than work, i.e. have sex with a stranger for money.” Wow. Romance. There’s no “I wanted it to be you so badly” or “I’m just a girl standing in front of a boy” or “I was looking up.” Nope. No. No. The movie is ruined because of one line.

But then it ends in a wedding, so I find myself being okay with it again. Almost.

Amy ends up with the best guy in this movie. You know Ed is never going to hurt her even though she cheated. It doesn’t seem fair. (Inner voice: Life isn’t fair.)

Is Dermot out of a job?